Yep, that's right.  I am now officially a podcaster.  In conjunction with KCAT TV in Los Gatos, CA, I recorded my 1st author interview yesterday under the moniker of Lloyd on Lit.  It will start out as a monthly 30-minute program.  I don't know exactly when it will air yet, but I will keep you all informed.

My 1st guest was Gary Singh, who is a poet, author, columnist, and, generally speaking, literary man about town.  Gary has been writing weekly columns for a local paper called Metro, Silicon Valley since 2005. He has written approximately 800 so far!  And, in fact, he recently published a book that compiles 250+ of his columns.  It's called Silicon Alleys.  I haven't read it yet but will.  (Plus, he's Zooming in to the RBC in July.)
My 2nd author interview will be with Hannah Jayne, author of the urban fantasy series called the Underworld Detection Agency and a bunch of YAs.  That should air sometime in May.  Meanwhile I am working on getting more authors scheduled.  Details to follow.
Here is a picture of Gary and Me from yesterday.  Just what I needed was a set of headphones to make my head look even bigger! 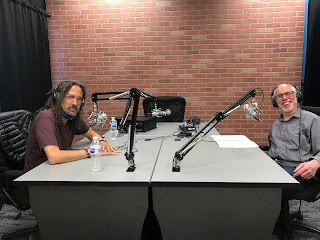 Posted by The Book Sage at 4:51 PM No comments: