Kate Quinn Has Outdone Herself!

In the autumn of 1939, Hitler's advance seemed unstoppable.
German military communications were relayed using
hand ciphers, teleprinter codes, and above all Enigma
machines - portable cipher devices that scrambled orders
into nonsense so that they could be relayed via Morse code over
radio transmitters, then unscrambled in the field.
Even if the scrambled orders were intercepted
by the Allies, no one could break the encryption.
Germany thought Enigma was unbreakable.
They were wrong.
This is the story of the men and women who worked at Bletchley Park during WWII going non-stop to intercept the German communications and break the codes.  The story centers on 3 very different women.  And you get caught up with each of them from the get-go.  Here are just a few of the reasons that, all combined, blew me away and made me love this book:
1.  Prince Philip (yes, that Prince Philip) has a significant role throughout the book.
2.  The story alternates in the voices of the 3 women.
3.  One of the women writes something called Bletchley Bletherings, which is a little gossip column.
4.  All of the support characters are interesting in and of themselves.
5.  Because it's historical fiction, we get to see Churchill and even that old codebreaker Alan Turing.
6.  There were so many emotional moments where I got chills, or teared up, or uttered an expletive!
7.  It obviously goes without saying, but Kate can really write.
Make sure you read the Author's Note at the end of the book.  It puts a lot of what she wrote about in historical context.  That was also fascinating.
I have just two questions for Kate.  What's next?  And when?  Please don't make me wait too long! 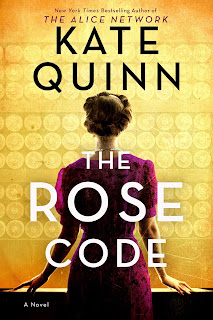 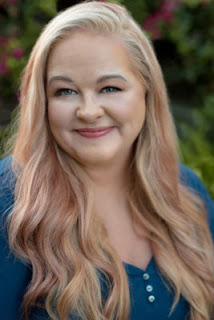 Review of a Really Good Book!

Three Words for Goodbye, by Hazel Gaynor and Heather Webb, is absolutely terrific.  It's about 2 sisters, their grandmother, and a long-distance trip, all of it taking place in 1937.  I couldn't put it down.  Here's what I liked about it:

1.  The writing is very visual.  Some examples:
"A uniformed guard threw open the compartment doors, sending travel-weary passengers spilling out onto the platform and scattering like marbles from a dropped bag."
"...couples holding hands, families and friends flitting around like butterflies, pollinating each other with love and good humor."
"...the way the watercolors blended and softened, running into each other like old friends."
2.  There is a lot of tension throughout the book regarding a particular mode of transportation that we all know about.  I won't say anything more about that, but you will know what I'm referring to soon enough.
3.  Violet, the grandmother, is a great character.  The chapters in her voice stand out.
4.  The relationship between the sisters is something many people can relate to.  Alas, I cannot.  I have 1brother who is 7 years older than me and who I haven't had any contact with for 40 years.  I certainly was engrossed in watching these 2 sisters work on their relationship.
5.  I am a big fan of books that alternate among 2 or more central characters.  The authors do a great job of making the reader anxious to know what all 3 of their protagonists are saying and doing.
6.  I had plenty of emotional moments, including...I can't tell you!  It's too much information!
7.  I just flat-out liked every page.  That is a rare occurrence.
Is that enough to convince you how I felt about Three Words for Goodbye?  I sure hope so.  You'll have to wait until July 27 for it to hit your bookstores.  But make a note.  You're going to want this in your TBR pile right away! 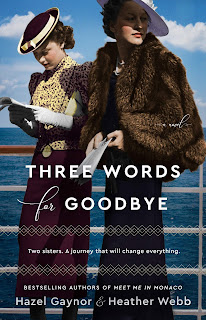 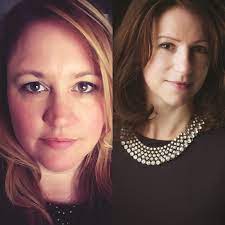