A couple of short reviews

I've got 2 short reviews for you.  And both books are by big-name authors:  Daniel Silva and Jennifer Egan.  Silva first.

House of Spies -
This is the 17th book in the Gabriel Allon series.  And I have enjoyed every one.  This one maybe a little bit less than the others.  It still got a 3.25/4, but normally I'm giving his books 3.5 or higher.  In fact, a good friend of mine said HoS might be the last one he reads in this series.  I'm definitely not there yet.  Will I ever be?  Probably not.  Having said that, my favorite Silva of all time is his very 1st book - The Unlikely Spy.  And that wasn't even an Allon.  It wasn't until book 4 that he started the series.  Just a couple of quick notes:

1.  I still got hit with surprises and emotions.
2.  I'm always happy to see Gabriel gather his work family for a mission, especially Eli.  And let's not forget Ari.
3.  Silva mixes in a little humor, which is very much appreciated since the topics in his books are so serious.
4.  He always creates a complicated/intricate plot that is still easy to follow.
5.  Make sure you read the Author's Note at the end of the book.  It's depressing, but important. 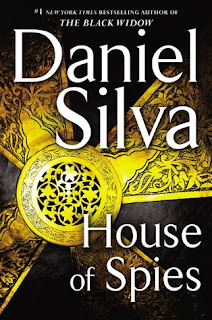 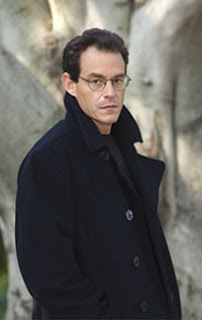 Manhattan Beach -
This is Egan's 6th book, and my 1st.  A Visit from the Goon Squad, as you probably know, won the Pulitzer Prize and the National Book Critics Circle Award.  So you can imagine how skeptical I was starting this one. Why did I read it?  Good question.  It's the Books Inc. 4th Tuesday Night Book Club selection.  I haven't been in a few months and thought I would give it a try.  In fact, there are at least 2 occasions when I started a book for that book club and said "Uh, uh."  Fortunately that wasn't the case this time.

Since this is 1 of 2 reviews in this post (which means 4 pictures), I will put the synopsis of MB at the very end.  That way you can more easily ignore it, or not.  Some observations about Manhattan Beach:

1.  It was definitely better than I thought it would be.  I rated it a 3/4.
2.  It was page 53 where I realized I was beginning to connect.  And then page 54 where I had my 1st emotional reaction (followed by several more).
3.  The writing is good.  Just a couple of examples -
"In the dry docks, ships were held in place by hundreds of filament ropes, like Gulliver tied to the beach."
"When she took a sip, it crackled down her throat - sweet but with a tinge of bitterness, like a barely perceptible pin inside a cushion."
4.  And a final random thought - late in the book, Clinton Avenue in Manhattan is mentioned.  Have you ever eaten at the Clinton Street Bakery?  Best breakfast anywhere. 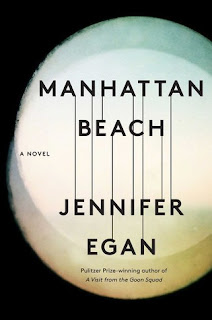 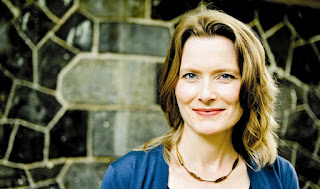 Anna Kerrigan, nearly twelve years old, accompanies her father to visit Dexter Styles, a man who, she gleans, is crucial to the survival of her family.  She is mesmerized by the sea beyond the house and by some charged mystery between the two men.
Years later, her father has disappeared and the country is at war.  Anna works at the Brooklyn Naval Yard, where women are allowed to hold jobs that once belonged to men, now soldiers abroad.  She becomes the first female diver, the most dangerous and exclusive of occupations, repairing the ships that will help America win the war.  One evening at a nightclub, she meets Dexter Styles again and begins to understand the complexity of her father's life, the reasons he might have vanished.