A Review of Book 1 of a Mystery/Thriller Trilogy

Pigeon-Blood Red, by Ed Duncan, is Book 1 of his Pigeon-Blood Red Thrillogy (his word).  I was sent this book (pub 2015) by the author through his publicist, Kelsey Butts of Book Publicity Services.  Here is the storyline:

For underworld enforcer Richard "Rico" Sanders, it seemed like an ordinary job.  Retrieve his gangster boss's priceless pigeon-blood red ruby necklace and teach the double-dealing cheat who stole it a lesson. A job like a hundred before it.  But the chase quickly goes sideway and takes Rico from the mean streets of Chicago to sunny Honolulu, where the hardened hit man finds himself in uncharted territory when a couple of innocent bystanders are accidentally embroiled in the crime.
As Rico pursues his new targets, the hunter and his prey develop an unlikely respect for one another and Rico is faced with a momentous decision: follow his order to kill the couple whose courage and character have won his admiration, or refuse and endanger the life of the woman he loves?
This book reminds me of another trilogy, Child 44 by Tom Rob Smith. That one is about a young KGB officer on the rise who suddenly gets a conscience.  It's a very good trilogy.  Pigeon-Blood Red has a ways to go before it reaches that level.  But what started out as a pretty unexciting start definitely picked up as it got rolling.  As the plot became more intricate, I became more interested in where it was going and what was going to happen.  By the end, I have to admit that I would be willing to read Books 2 & 3 (both are already on the market).  That speaks more volumes than anything else I might have said.  Ed and Kelsey, let's see where Rico, Paul, and Evelyn go from here. 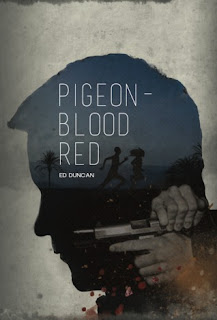