You all know I'm a big Jamie Ford fan.  Both of Jamie's 1st 2 books - Hotel on the Corner of Bitter and Sweet and Songs of Willow Frost - sit on my rec table at Recycle Books on Sunday mornings.  And I would venture to say that I have never spoken to anybody who didn't like Hotel.  So I was understandably very excited when #3 came out.  And I have to say that it was good (I would expect no less from Jamie), but not quite as good as the other 2.  I'm not exactly sure why.  I think it all comes down to my emotional connection to the characters.  I had a little emotion here and there.  But it wasn't as strong as usual.  I'm making it sound like it was nowhere near as good as Hotel and Songs.  And that it is simply not the case.  I mean I still rated it a 3.25/4!  But all I'm saying is that it doesn't quite measure up.  Here is the blurb:

For twelve-year old Ernest Young, a charity student at a boarding school, the chance to go to the World's Fair feels like a gift.  But only once he's there, amid the exotic exhibits, fireworks, and Ferris wheels, does he discover that he is the one who is actually the prize.  The half-Chinese orphan is astounded to learn he will be raffled off - a "healthy boy to a good home."
The winning ticket belongs to the flamboyant madam of a high-class brothel, famous for educating her girls.  There, Ernest becomes the new houseboy and befriends Maisie, the madam's precocious daughter, and a bold scullery maid named Fahn. Their friendship and affection form the first real family Ernest has ever known - and against all odds, this new sporting life gives him the sense of home he's always desired.
But as the grande dame succumbs to an occupational hazard and their world of finery begins to crumble, all three must grapple with hope, ambition, and first love.
Fifty years later, in the shadow of Seattle's second World's Fair, Ernest struggles to help his ailing wife reconcile who she once was with who she wanted to be, while trying to keep family secrets hidden from their grown-up daughters.

There is no question about Jamie's ability to write.  Take a look:

"We all have things we don't talk about, Ernest thought.  Even though, more often than not, those are the things that make us who we are."
"...and his shoulders were covered in epaulets of pigeon droppings."  (I know...ew, right?)
"He chose his words the way a man on thin ice chooses his footing." (he's referring to men talking to women - I am NOT going there!)
"...Maisie disappeared behind a large Coromandel screen, followed by a trio of seamstresses, who attended to her like a flock of fairy godmothers."

I mean, c'mon.  Jamie Ford can really write.  And, again, I feel like I'm being a little unfair to him.  It's just that when I read 2 books that are both 3.5s, I want/expect all of that author's books to be at least 3.5 (you'll see what I'm talking about when I review my 3rd Sally Hepworth). Regardless of my (probably) unfair expectations, I still recommend Love and Other Consolation Prizes. 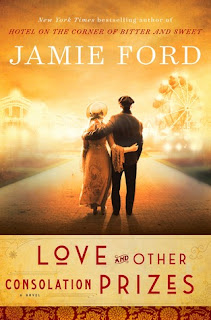 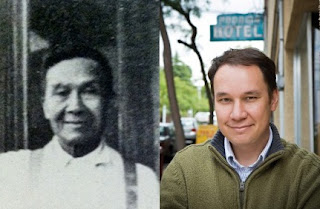 That is Jamie's great-grandfather