A couple of times a year, unsolicited, I get books in the mail sent by publishers.  As a blogger, I usually try to read what they send.  Some have been successful (I ALWAYS love getting the latest Coben!), and others...not so much.  In this case, I got a book from Dutton written by Jeff Lindsay. This is the guy who wrote 8 books in the Dexter series, which, as you know, was a successful TV show.  What I got is Just Watch Me.  This is Book 1 about the antihero, Riley Wolfe.  And I have to say that it was pretty darn good.  Here's the blurb:

Sure, Riley Wolfe steals for the money - but mostly he steals for the challenge.
In this series debut, Riley aims for an extraordinary target:  the Crown Jewels of Iran.  Yes, these jewels are worth billions, but Riley's urge to steal them comes down to one simple fact:  it can't be done.  The collection is on tour in America, guarded by space-age electronics and two teams of heavily armed mercenaries.  No one could even think of getting past the airtight security and hope to get away alive, let alone abscond with even a single diamond.
No one except Riley Wolfe.
But this challenge may be more than even he can handle.  Aside from the impenetrable security, Riley is also pursued by a brilliant and relentless cop who has spent his career getting closer and now is barely one step behind him.
With the aid of Monique, his sometime ally and a master art forger, Riley Wolfe goes for the prize that will confirm his legend - or, more likely, leave him dead.
A mesmerizing heist novel for now, this is the book fans of Jeff Lindsay and the wildly successful Dexter Series have been waiting for.

It's not often that the main protagonist is a bad guy.  But he sure is interesting.  The story is pretty complex, but it all makes sense.  It's well written and even comes with some surprises.  I would definitely recommend it.  And I am looking forward to #2.  3.5/4 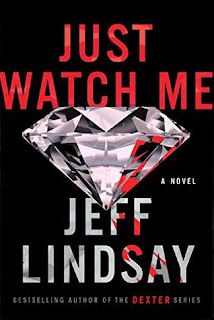