Our 2nd of 4 nights in a row was at Book Passage in Corte Madera.  We went to see Richard North Patterson, who has just come out with his 20th novel(!), Loss of Innocence. I am a huge RNP fan.  In fact, he is in Volume I, February 19, 2011, AND Volume II, February 18, 2012, of my Fiction for the Non-Fiction Reader.  Exile is one of my favorite books from the last few years (I), and Protect and Defend (II) is also terrific.

Loss of Innocence is a prequel to Fall of Grace.  It takes place in 1968, which RNP considers the most historical of years for our generation (yes, I am a baby boomer, along with RNP - we're 2 years apart).  In fact, Gloria Steinem, no less, told him that he got the details for this book right (anybody have any bras to burn?).

Loss of Innocence, the second book in the Blaine trilogy, “in one life of the 1960s, symbolizes a movement that keeps changing all our lives” (Gloria Steinem) in “a richly-layered look at the loss of innocence not only among his characters but that which America lost as a nation." (Martha’s Vineyard Times) “An extraordinary novel—profound, emotionally involving and totally addictive,” said actor and author Stephen Fry, “this may be Richard North Patterson’s best work.”
America is in a state of turbulence, engulfed in civil unrest and uncertainty. Yet for Whitney Dane- spending the summer of her twenty-second year on Martha’s Vineyard--life could not be safer, nor the future more certain. Educated at Wheaton, soon to be married, and the youngest daughter of the all-American Dane family, Whitney has everything she has ever wanted, and is everything her all-powerful and doting father, Charles Dane, wants her to be. But the Vineyard’s still waters are disturbed by the appearance of Benjamin Blaine. An underprivileged, yet fiercely ambitious and charismatic figure, Blaine is a force of nature neither Whitney nor her family could have prepared for.

As Ben’s presence begins to awaken independence within Whitney, it also brings deep-rooted family tensions to a dangerous head. And soon Whitney’s set-in-stone future becomes far from satisfactory, and her picture-perfect family far from pretty.

An acknowledged master of the courtroom thriller, Patterson’s Blaine trilogy, a bold and surprising departure from his past novels, is a complex family drama pulsing with the tumult of the time and “dripping with summer diversions, youthful passion and ideals, class tensions, and familial disruptions.” (Library Journal)(less)
Sound good?  Heck yes.  I know I'll be reading it.  In fact, it's already way up  the ridiculously high queue. I enjoy anything he writes. 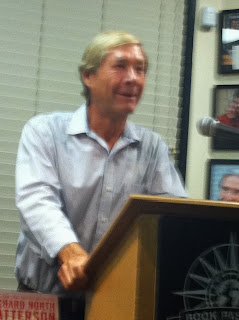 I know.  The picture is not too good. 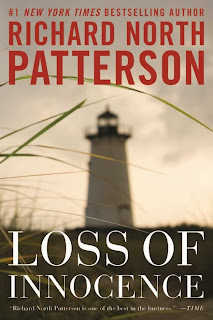