Shelley Bates, using the pen name Adina Senft, has written a number of books about the Amish.  Her 1st series was called the Amish Quilt Trilogy.  I read books 1 & 2 and really enjoyed them.  I still have #3 sitting in a box - somewhere.  So, when we booked Shelley for the RBC, we talked with her and decided to go with the 1st book in her new series.  Shelley calls each one (she now has 3) A Healing Grace Novel.  This one is Herb of Grace.  And unlike the Amish Quilt Trilogy, where each book focused on a different woman from the same quilting group, the Healing Grace novels center on one woman.  Her name is Sarah Yoder.  Here's a quick rundown:

Amish widow Sarah Yoder has been struggling to raise her two teenaged sons and provide a home where family and members of her Old Order Amish church can find fellowship and friendship. Though she is close to her in-laws, lately it feels like her relationship with her boys is splintering. Her stepson Simon wants to move out west with his cousins to find work. And her youngest, Caleb, is spending far too much time over at the tumbledown home of a man who left the church long ago. Henry Byler only returned recently to Willow Creek when he inherited the family farm--under protest--and now seems caught in a struggle between the faith of his childhood and the world he's come to know. Ruth Lehman, the local Dokterfraa, believes Sarah should use her gift for growing plants to become an herbal healer, too. Sarah is reluctant, however, uncertain if caring for others will take her away from her family--the place where she believes God wants her. But when she feels called to help members of her community, she soon discovers that the heart can be scarred as deeply as the body. As she compiles her herbs, she waits for God to do his healing work in a man who rues a harsh decision, in a lonely prodigal who has lost everything, and maybe even in a herbalist-in-training who firmly believes she will never love again.

Why do I like Herb of Grace so much?  Is it because I'm Amish?  Uh, no.  Perhaps I'm a big fan of religious fiction.  Again, not so much.  Is it because I know and like the author?  I wish that were the case.  With the amount of books I read from local authors, that would make my life so much easier.  But, once more, the answer is no.  Let me give you the yeses:

1.  I absolutely connected with every character.
2.  I loved the relationship between Sarah and Henry, even though it is doomed from the start because of their religious differences.
3.  Shelley helps us understand, at least a little bit, the Amish culture.
4.  She makes us feel how hard it must be for a mother to raise 2 teenage boys by herself.
5.  She made me laugh a little - and cry a lot (I actually blubbered late in the book - I know, big surprise).
6.  The writing is just excellent.  Shelley writes with subtlety, something I am not typically known for.  Here are a few examples:

-On page 1, Sarah, the narrator, is describing another woman in her community.  She says: "Ruth was blessed with the happy conviction that when God put a thought into her mind, it was His will that she pass it along."  I think we all know people like that!

-Sarah is talking about how her view changed, "...the way it did in the doctor's office when he put the lenses in the machine."  That's a good visual (pardon the pun).

-Ruth, Sarah's mentor, talks to Sarah about weeds.  She says:  "Weeds are only plants that aren't growing in their proper places..."  I'll bet none of us thought of weeds that way before.

-Sarah is talking to one of her patients, who wants to know if tea, by itself, can take care of his "plumbing problem."  Sarah says:  "Asking the tea to make you well is like asking a chicken to lift a wagon."  I think she made her point.

There are a bunch more.  But here's my favorite example of how Shelley writes with such a subtle hand.  Sarah is talking about Henry's facial expression when he sees her late at night:

"Polite.  Not welcoming, as a friend's might be, but pleasant and noncommital.  Which was exactly as it should be, after this afternoon.
But it was a little disappointing."

Shelley doesn't beat us over the head with it.  And, yet, we very clearly feel what Sarah feels at that moment.  I repeat - subtle.  And whether you are an RBC member or not, please read Herb of Grace.  You will NOT be sorry. 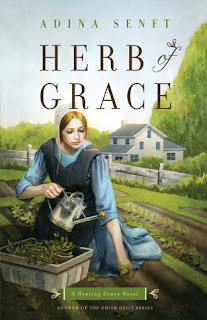 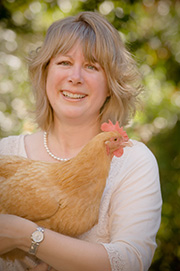