The Race for Paris, by Meg Waite Clayton, reminds me of Orphan Train.  That book takes a very interesting, but lesser known, part of American history - the orphan trains that brought homeless and orphaned children from the big Eastern cities to the rural Midwest from 1854-1929 - and places it in front of us for all to see.  Meg's book does the same thing.  How many of you knew that female journalists and photojournalists, oftentimes without permission, attached themselves to Allied armies (mostly American and British) and were present for the liberation of Paris and even beyond into Germany?  Not I, said the old but clueless book blogger.  Well, all you need to know about the book is what the 1st paragraph of the flap tells us:

Opening in Normandy on June 29, 1944, The Race for Paris follows two American female war correspondents on their quest to document (and make) history by covering the Allied liberation of Paris.  Jane is a young, single journalist for the Nashville Banner.  When she's assigned to cover a field hospital, she meets Olivia, "Liv," an Associated Press photographer.

Much of the book deals with the obstacles Jane and Liv face just because they're women and especially because they're almost continuously in war zones.  We all know what a good writer Meg is.  Those of us who live in the Bay Area have also had lots of opportunities to see her at author events.  I even have the privilege of being in a book club with her and seeing her periodically at our meetings (when both of us happen to get there in the same month).  I've already told you about the launch at Kepler's that I attended last week.  But I hadn't read the book yet, and now I have.  And I'm very glad I did.

The Race for Paris does a lot of good things:

1.  The beginning of each chapter has a real quote from a male or female journalist or photojournalist from that period of history.
2.  The 1st and last chapters of the book take place 50 years after the summer of 1944. When the book ended, I even went back and reread the 1st chapter to get a better sense of what was happening in 1994.
3.  Meg gives us humor, emotion, romance, and lots of adventure.
4.  She also made me say "Oh, man," raise my eyebrows skyward, and utter a long "hmmmm."
5.  But most importantly, she takes a significant time period of history and teaches us all who the modern-day female journalists and photojournalists have to thank for their current place in media circles.

Although Jane and Liv are fictional characters, they are based on real women - women who put their lives in danger in order to write the stories and take the pictures so that their countrymen and women would know the truth about the war.  I, for one (representing many, I'm pretty sure) appreciate that Meg gave us this story.  It's a very important book, and the fact that it's so well-written is just a bonus.  Thank you, Meg, for this gift. 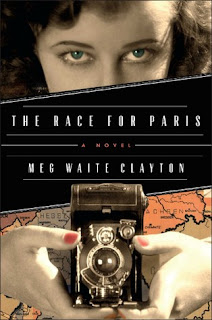