I know that the title of this post is not too exciting.  But I did get the chance to see Yaa Gyasi this past Tuesday night.  The timing was fortuitous because Nicole Hughes, formerly of Kepler's, strongly suggested I read Gyasi's book, Homegoing.  And since Gyasi lives in the Bay Area; and because I'm always looking for local authors for the RBC; I purchased her book and got ready to start reading it.  And then I saw on a Rakestraw email that Gyasi was going to be at their store just a few days later.  Divine timing, right?  Ok, divine might be a bit strong.  But the net effect is the same.  So, Joni and I ran up there, fighting the horrendous commute traffic, and still got there in time for a quick bite (at Sideboard) before the 7:00 event.

So, what about the event, you ask?  Well, we learned some very interesting things about Gyasi's process in writing the book along with her background:

1.  It took her 7 years to write.
2.  She connected with agents through the Iowa Writers Workshop that she attended for several years and where she finished her book.
3.  Much of the book takes place in Ghana.  That is where she was born and where a lot of her family members still live.  She and her family moved to the U.S. so that her father could get a PhD in French!
4.  She entered a children's literary competition at the age of 7 which is when she knew she wanted to be a writer.  Levar Burton even signed her certificate of participation!
5.  She knew the 1st 2 and last 2 characters of the book, but not the many in-between (the book goes from the mid-1700s to the present).
6.  She has already been on a local book tour and will be going on a 10-city, 13-day national tour in October.  Plus, the book will be coming out internationally the beginning of 2017, and she will be touring across the pond!  How cool is that?  (P.S.  I guess it's going to be a bit difficult getting her to come down to Recycle Books for the RBC.  Agreed?)

Here are some pictures.  And I will be reviewing the book in a couple of days. 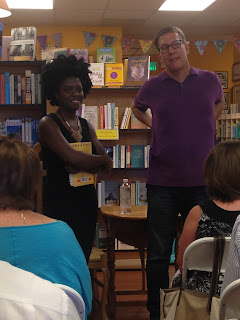 Yaa being introduced by Michael, the owner of Rakestraw Books 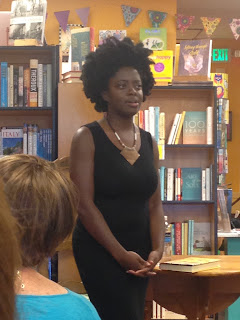 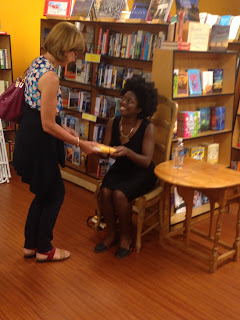