This month's 4th Tuesday Evening Book Club for Books, Inc. Palo Alto is called The Slow Waltz of Turtles by a french author, Katherine Pancol.  As Tatiana de Rosnay, author of Sarah's Key, says:  "Lucky you!  You're about to succumb to France's most irresistible writer!  At the end of this delicious, tender, fun, heartwarming novel, you'll feel as if Iris and Josephine are part of your family."

Let me hit you with the blurb on the inside cover:

FORTY SOMETHING MOTHER OF TWO Josephine Cortes is at a crossroads.  She has just moved to a posh new apartment in Paris after the success of the historical novel she ghostwrote for her sister, Iris.  Still struggling with her divorce - the result of her husband running off with his mistress - she is entangled in Iris's messy lie.  And as if that's not enough, people have started turning up dead in her neighborhood.
As Josephine struggles to find her voice and her confidence amidst a tangled web of relationships and a string of murders, she and those around her must learn to push on with determination, like headstrong little turtles learning to dance swollen in a world too violent and moving too fast.

I know this is a popular author and book.  And Goodreads averages 3.51/5, while Amazon is a bit higher at 4/5.  I gave it a 3/4, so I'm pretty much in line with everybody else.  But even though I liked it, it kind of felt like a Seinfeld episode.  There is so much going on that, sometimes, it felt very random to me.  Seinfeld, right?

And, like Seinfeld, I liked all of the various characters.  One of my favorites was Henriette, Jo and Iris's mother, who tried to sabotage (in a very unique way) the marriage of her ex-husband to a much younger woman.  Henriette reminded me a lot of Lady Virginia, another ex-wife, this one in the much-loved-by-me 7-book Clifton Chronicles, from Jeffrey Archer.

There's no question that Pancol can write:
1.  "I'm going to talk to him today, she decided with the boldness of the very shy."
2.  "When it comes to loving, they really love each other.  They're like two candies in a box, stuck together."
3.  "The corners of her mouth curved down, like that of an aging gambler who has lost it all."

I didn't have a lot of emotional connections, although, like I said earlier, I did like the characters.  And late in the book I had a pretty dramatic jaw-drop.  But I do have one complaint.  Whoever translated it into English made way too many errors, many of them of the egregious variety.  I admit that this is a relatively small concern.  I think it's more a problem of my anal-compulsive-ness than anything else.  So be it. 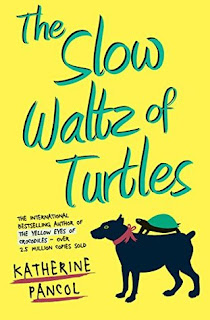 My book cover was blue with yellow stars - odd

My Non-Review:  What's a non-review, you ask?  Well, it's an opportunity to tell you about a book that I stopped reading.  Now I know that many of you (along with millions of others) love Jacqueline Winspear's Maisie Dobbs series.  Her 13th book, In This Grave Hour, was sent to me by the publisher in ARC form.  This was a couple of months ago.  I finally got to it.  Mind you, I've never read any books in this series.  But I figured, like most series, each book stands on its own.  And I was right.  The problem is that I just couldn't get into it.  I like the fact that it is an historical mystery (it takes place in 1939, right after England enters WWII - and Maisie is British, by-the-by).  Otherwise, not so much.  I did get through 72 pages.  Since I stopped The Goldfinch on page 19, 72 is pretty darn good.  Right?  What?  No? 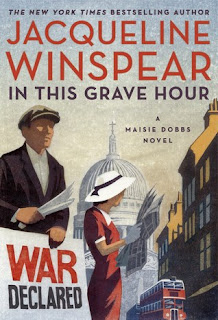 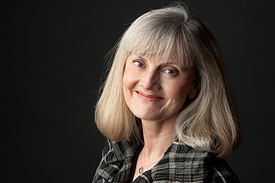