I kept looking for the right event to go to Saturday in celebration of Independent Bookstore Day.  Every bookstore had a whole bunch of authors to see.  I was pretty much settled on seeing Meg Waite Clayton in conversation with Margie Scott Tucker (Margie runs the 4th Tuesday Night Book Club, which I try to get to as often as I can), 2 of my favorite bibliophiles, at Books, Inc. in Palo Alto.  But then, lo and behold, I saw that Kristen Hannah, author of The Nightingale, was making her only Northern California appearance at A Great Good Place for Books, in Oakland.  That was the winner.  It was being held in a local church because of the expected audience, and it started at 7:00.  That gave our group (4 of us) a chance to eat 1st at Crogan's in Montclair District.  It was really good.  But I digress.

Kristin has written 20 books.  But this is the one that has had the most impact, both to her and to her fans.  She first seriously thought about becoming a writer in her 3rd year of law school.  Kristin and her mom talked about writing a book together.  The night before her mom died, she told Kristin that she was going to become a writer.  It took a few years, but her mom was prophetic.  It actually happened when Kristin was pregnant with her 1st child.  At 14 weeks, she was told that she had to be in bed for the rest of her pregnancy.  Her husband recommended that she write the historical romance  that she and her mom were going to write.  And so it began.

She sold her 1st book when her son was 2.  And then she began to write in earnest.  After 5 romances, she broadened her scope to include the genre of commercial women's fiction.  And then she finally came to a point where she wanted to write fiction based on strong women from historical settings.  She read a bunch of memoirs from women in the French Resistance.  This led to The Nightingale.  And we all know how that took off.  It's currently in 39 languages!  And guess what?  It's been optioned for a movie, in which all of the behind-the-scenes moviemakers are women.  How exciting is that?  And don't worry.  I will definitely let all of you know when it hits the big screen.

Now that I've had a couple of days to ruminate on whether or not I made the right choice this past Saturday, I'm more sure than ever. Thank you, Kristin, for giving us a book that not only entertained, but that also taught us something we are all happy to learn. 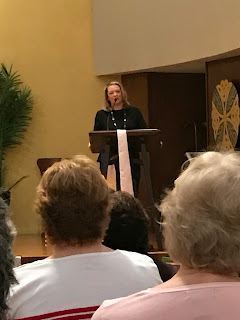 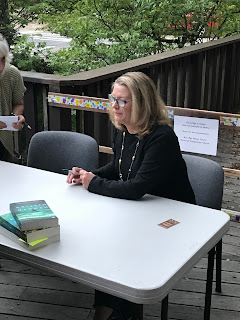